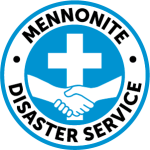 “It was nothing short of a miracle. It never would have happened without MDS. It’s just so unreal. I don’t know how to thank MDS. It’s amazing how people we don’t know came to help us. It’s God sent, that’s all I know.”

That’s what Diane Rice of Triton, Newfoundland said after MDS Canada, together with local volunteers in that community, rebuilt her home that was destroyed by fire.

Her comment reminds me of why MDS Canada exists—volunteers who are sent by God to be the hands and feet of Jesus when people are hurting and need help.

Although 2021 was a hard year for us—the pandemic curtailed most of our responses in this country and prevented Canadians from going to the U.S. to volunteer—it couldn’t stop us from doing what we could to help people impacted by disasters. Despite the pandemic, and the restrictions it imposed, we still responded to people in need.

In Ontario, we worked with MCC to promote reconciliation with Indigenous people by providing volunteers to renovate the MCC Indigenous Neighbours office in Timmins. We also worked with MennoHomes, an organization that provides affordable housing in Kitchener, to renovate a derelict house into a home for a Syrian refugee family. In Barry’s Bay we were able to renovate a house to accommodate a family with a disabled child, creating a safe, sterile, and temperature-controlled space.

In B.C., we learned you can be off the grid but not out of God’s plan when it comes to rebuilding a house. That’s what happened after a fire destroyed the home of Cliff and Lydia Trudeau at Cuisson Lake. Rebuilding their house was challenging, since they live in a remote part of the province. With some creative thinking on the part of volunteers, along with energetic ingenuity and lots of prayer, the house was completed in August.

Also in B.C., volunteers responded to needs in Princeton, where about 300 families had their homes damaged or destroyed by flooding.

In Saskatchewan, we renovated the office and home of the director at the Westbank Bible Camp. Said the director about the volunteers: “They showed up with a servant attitude and posture, always asking what they could do for us, how they could serve us,” he said. “It was phenomenal. They had such servant hearts.”

In Newfoundland, MDS Canada supplied the funds and local people in Triton provided the volunteers to build a new house for Diane and Reginald Rice after fire destroyed their home.

Across Canada, we responded through the Spirit of MDS Fund. Through the fund, we provided 81 grants worth $206,900 to churches involved in frontline service to people impacted by the pandemic. At MDS in Canada our goal is to use our core values of faith in action and caring relationships to be a witness to God’s love for the world. We invite you to consider volunteering with us and joining us in praying for God’s continued blessing on our work.